The First Pattern I Sold 25 years ago 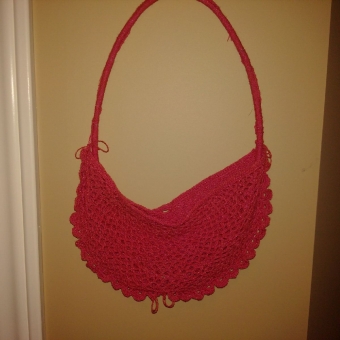 Young and naive, I thought the crocheters of the world would make me rich.

When my children were young, and I wasn't working due to an illness, I thought I could make some money by designing crochet patterns and selling the patterns. Great idea, but wrong pattern. I can't believe I tried to sell this...

So the photo to the right is of what remains from the original design. It used to be perfectly symmetrical, had a flower and hung on the wall. What was it you ask? It was a potpourri  holder. At the time it looked lovely. Now, after 25 or so years, several moves, and being packed in boxes forever, it looks like this and it's headed for the garbage bin.

But before I did this, I thought I would write about where I started so many years ago and the lesson I learned.

So, when I set out with this brainstorm, it was pre-internet as we know it today.  A few lucky people had it at work, but not yet an everyday necessity in the home. Being the collector of crochet patterns and magazines that I was, (or should I say still am), I pulled out one of my favourites crochet magazines, asked how much it would be to place a classified with a black and white photo and off I went.

I found the money ($365 U.S.) for a classified ad to run in black and white, in one crochet magazine for one month. Can you believe it.  I was selling the pattern for $4.99 I think, plus shipping. Of course the ad and payment had to be sent 3 months in advance of when the magazine hit the streets. So, I paid the money and waited.

When my copy of the magazine arrived, everyday after, I waited for orders to come flooding in. I checked and rechecked the mailbox everyday. After 2 weeks, I checked periodically and after that I gave up. About six months later, I received one order. By then, I simply laughed. All that money for one order.

So what went wrong?

Today, I do sell my patterns. Am I getting rich? No.

But it does let me put my creative talents to use for others to enjoy. Crocheting is a hobby that I love.  By designing items I want for myself, then documenting the pattern as a saleable item, it doesn't seem like work. It is a hobby that brings a little income here and there.

My patterns also give others something to crochet, and I do make enough to cover the cost of this website, my crochet yarn and expenses and even the advertising I do to sell the patterns. So am I making money from crocheting? Sure, if you don't count the time I spend crocheting the patterns, or the time creating the written pattern in a saleable form.

I'm at least fortunate that I am a graphic designer and own a marketing company, so I don't have the expenses others would in getting their patterns to print.

More than money, it's the satisfaction of a finished project and the comments and photos from others who have made my designs.