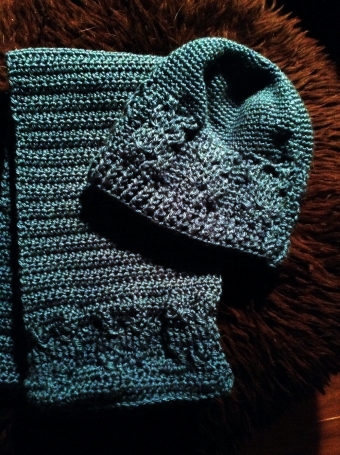 There's a reason I design crochet patterns instead of crocheting from other designer's patterns. It's just easier...

Sure, I spend countless hours designing a pattern; counting, measuring, working the stitches, unravelling, redoing, writing it all down.

I would rather do all of this and end up with something I have created that works than be frustrated when it doesn't.

Recently I ran across a set of patterns for hat, scarf and mitts - that I purchased. Yes, I actually purchased the patterns. Rare for me.

Owls! If you know me, I collect owls. I love owls. I have owl everything. So, when I saw this pattern set, I thought why not. I could use a crochet project that is effortless - just follow the pattern and crochet.

Well -- I might as well have designed it myself. The frustration was endless. The hat is where I started. I made two - one for a child and one for me, and I didn't do this intentionally. The child version was because the pattern did not specify the gauge, or the amount of yarn -- I'm not even sure it mentioned the type of yarn.  Anyway, knowing myself, my tension when crocheting etc., the first go of the hat, I chose a hook 25 mm smaller than the one recommended. In reality, I needed a hook 50mm larger than the one recommended to achieve a hat that would fit me - and I have a small head.

The pattern was awkward to follow and required a pretty good understanding of crochet to figure out what the designer was asking you to do. As experienced as I am, it still took me several tries to get the stitches correct to achieve the effect for the owls in the pattern.

The scarf worked up fairly effortlessly after having struggled with the hat for so long. And, I decided not to make the mitts as A) I rarely wear them; and B) I didn't have enough yarn -- the designer didn't specify how much yarn was required for each. I bought 4 skeins. I would have needed 5 - I might have made it through with 4, but I wasn't willing to find out.

As many of you know, my patterns are not perfect either. Although as designers, we try to get the instructions as simple and easy to follow as we can, but sometimes we just get it wrong. Sometimes, we understand, but know one else does. Sometimes, we are so eager to finish the project, we omit writing a line of instruction down. And sometimes when we print the finished pattern for distribution, typos, errors and omissions occur.

Yes to all of the above!

Note: I have yet to sew the eyes on the owls in the design pictured - and knowing me, I probably never well. Sewing, even just adding simple buttons - not for me..